Okay, I'm a  pretty bad travel blogger because I snarfed up this blog url (er, copied from Sharky) before I left for the trip and never found the time to write while in Chile.  I'm now on the plane returning to lovely Hawaii nei, and attempting to jot it all down before I forget.  Mahalos to Sharky for recommending this trip to us.  It was everything he said it might be: a great place for awesome thermalling and kiting rounded out with great instruction and local foods.


Wake, eat, fly, eat, sleep, wake, kite, fly, kite, eat, sleep, repeat for 10 days.  Not a bad vacation for a paraglider pilot; a bit grueling for some of us out-of-shape older working stiffs, but gratifyng nonetheless.

This region of Chile is awesome for paragliding, with tall steep hills near the coast, large expanses of sandy playgrounds and LZs, and virtually no rain or pesky weather systems-- usually.  The trip has previously been held in November -- late spring in Chile -- for the best thermal conditions.  This year they scheduled it a little earlier, and we were rewarded with mellower thermals, but the tradeoff was a few days where clouds hung around the morning launch long enough to compel us to give up on it or rather light winds in the afternoon kiting playground (both good opportunities for ground school!).  Another benefit of the early trip or perhaps El Nino was the unexpected appearance of some lovely green ground cover on the "big hill" of the Palo Buque site, quite out of
character with the rest of the regional terrain (excepting the patches of grass and small palms in town that were actively watered everyday from large water trucks). Another nice feature is a dual lane highway drive up the hill to launch, with another highway under construction. Several more launches down the coast can be reached by 4-wheel drive.  There are also large expanses of undeveloped sand dunes

Todd, Luis, and Marcos, our tour leaders, each contributed to various aspects of the training: groundschool covering safety, flying concepts, physics of angle of attack and what happens and how to respond when AoA goes awry;  each also wowed and inspired us with their able flying; Todd  readily demonstrating the kiting skills we should aspire to, Luis finding thermals and turning to heights with ease and guiding the successful pupils to XC goals, and Marcos a little of both.

Many folks on this "educational" segment of the Iquique trip were relatively new or low airtime pilots.  The next two segments are going to progressively focus a bit more on thermal and XC flying.  Johnimo is staying on for the 2nd segment.

The first evening we arrived we had nice evening light ridge lift mellow thermal conditions.  It was a nice treat after the 34 hours of airline travel and layovers to have a brain-dead-simple extended sledder in the late afternoon light.

The next two days provided beautiful sunny mornings for perfect thermalling conditions. Being a bit rusty, I couldn't hold the big ones the first morning and took the safe trip to Huayquique Beach.  The second morning, Todd and Luis coached me around through a couple of thermals and with that better start I was able to repeat with a few more thermals and eventually go high enough to head to Playa Brava near the hotel.  I soon learned an extra bonus at Playa Brava is the green grassy areas actively maintained by the city of Iquique which make for a much cleaner folding area than anything near Huayquique -- in addition to not having to pile into a retrieve van for the ride back to the hotel for lunch.


The first two afternoons at Palo Buque were somewhat fickle with light winds one day then super strong winds the next, but day #3 was a charmer with perfect winds for all kinds of play, kiting on the level, kiting up the hill, and soaring either hill.  Mark from Maui made multiple XC trips to "Mystic Dunes."   His wife Theresa, and Annie, also from Maui, rounded out a nice Hawaii contingent on this trip.  Others from around the globe included John from Vermont, Bill from Alaska, and Ping Ping from Singapore.

One morning we took a trip to Black Mountain -- a taller steep ocean-facing mountain site reached by a fun four-wheel drive mining road over and around large sand dunes like something out of a movie.  The launch was eerily above the inversion layer, and warmer than the air down below.  We waited for the inversion to lift and cycles to start coming up. Finally, we were able to launch, float down through the bumpy inversion, down to lunch in the quaint fishing village below.  The thermals on this day were not quite what we'd hoped for, but the views and fresh seafood made up for it.
Of course, we went to many great restaurants throughout the trip that ran the gamut from the fishing huts in the small village of Los Verdes to artsy pizza to a fusion Peruvian-Sushi place.  Many pisco sours and complimentary shots added to the festivities. 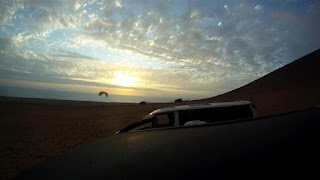 Both John and I learned many new things on this trip.  Even as I watch my GoPro videos now, I'm coaching myself -- "Turn darn it!  Keep that radius smoother! tighter!"  Easy to say now as while watching the video I can't feel what then seemed like the thermals slipping away from me in different directions.    It was a good last hurrah for my dear old wing.
Posted by sandy at 11:03 AM 3 comments: